Belintash is a rocky landmark, which has the form of a small plateau, in the Rhodope Mountains. There have been found signs of human activity dating back to 6th century BC. It is located 30 km southeastern from the city Asenovgrad. It is supposed that this cult site was used for the ritual needs of the then local tribes. Even now the sanctuary is being examined because almost nothing is still known about it. Some presume that this ancient sanctuary was devoted to god Sabazius. In the later epochs, the Thracians inhabited this area of the mountain. The upper platform of the plateau is marked with carved round holes, trails, niches and steps which according to the scientists, forms a stellar map. The sanctuary is 1225 m elevation above the sea level. This is the second largest rock-cut sanctuary in Bulgaria. According to other researchers, the site, except its ritual purpose, was also used for astronomical researches. The path to the central part of the sanctuary passes through huge rock-cut or human-made anthropomorphic and zoomorphic rocks engraved in the massif of the plateau. On the upper platform can be seen various geometrical outlines, as well as two carved rock basins (often called shterni) that don’t dry even in the hottest days of the year. 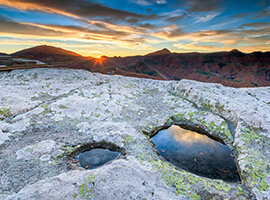 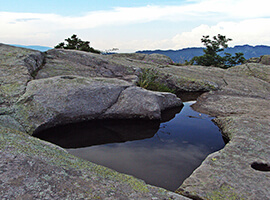 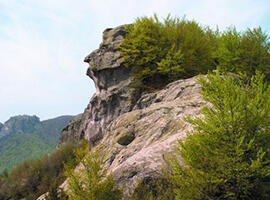 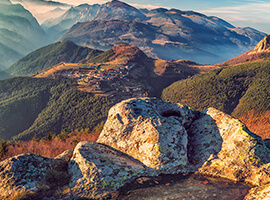 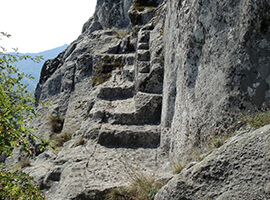 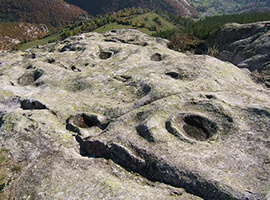 Legends and connection with other archaeological landmarks

The proximity of Krastova gora and the fact that the archaeologists have discovered at least five ancient sites, some of which have functioned at the same time – the relation between the cult sites is more than accidental. According to the archeologists, the area can be viewed as a huge complex of cult places and sanctuaries, which at different time periods were more or less active.

One of the most famous treasure-hunter’s legends about the sanctuary is that the uncle of the famous general Alexander the Great, died during the war with the Persians somewhere around the area. Belintash is a favourite topic among the so-called Bulgarian ufologists according to who the site is saturated with strong energy fields and the rock plateau is a UFO space station. There is also a legend according to which somewhere beneath Belintash the Thracians have hidden an ancient library. Another threasure-hunter legend says that somewhere between Belintash and Karadjov kamak, monks from the medieval monastery of Krustova gora have hidden untold riches and literature.

Regardless of the legends, Belintash is frequently visited by many Bulgarian and foreign tourists.

From Asenovgrad you can take the road to the city Kardzhali, after about 10 km there is a road (right) through the village of Cherven, which passes through the village of Gornoslav, then follow the road through the village of Oreshets. At the road fork for the village of Mostovo, go straight (the village of Mostovo is on the right), until you arrive at the next road fork for the neighborhoods of Vrata and Kabata. Follow the asphalt road, which passes through Vrata, until you will reach an unpaved exit to the right, (look for the small abandoned stone building). Go right (there is a signpost) along the gravel road and after about 2 km you will reach the blue signpost of the Belintash Nature Park. To the left is the gravel road to the Chotrov neighborhood, and to the right – to Belintash. Approximately 2.5 km along the gravel road you will find a building that resembles an Orthodox church, from there follow the path on the right and up the hill, and after 20 minutes you will arrive at the very beginning of the rock plateau.