Peak Karadjov kamak – Karadjov’s stone – (1448 m) is located in the most southeastern part of the Gradishte elevation in Rhodope Mountains. The place is a high rock plateau with steep rocky slopes over 100 m high. The plateau covers an area of 4550 m². The whole plateau is covered with dozens of pits of natural origin, however, they were further improved by human hand. The only way to enter in the plateau is through a rocky cleft in the southwest, called by the locals Boaza. The cleft is 18 meters high and at the top of you can spot about 10 carved steps, however, they are almost washed away by the rainwater. The first archeological surveys of the plateau were carried out not until 2004. According to the scientists, the sanctuary date back to the 3rd century. The location of the sanctuary in the Belintash area, however, points to an earlier dating back to the New Stone Age and its later re-use by the Thracians. In 2003, it was found that Karadjov’s stone served as a sanctuary during the early Iron Age and the late Ancient period.

Connection with other archeological sites

In the immediate vicinity, there are: the rock phenomenon – the sanctuary of Belintash; the cromlech to the peak of the Turkska kula and the sanctuaries of peak Haidut kaya and the Inkaya and Kaz kaya. According to archaeologists, the area can be considered as a large complex of cult places and sanctuaries that at different times were more or less active. All of the above-described objects fall into one distinct micro-region, whose cult center was probably the Sanctuary of Belintash. 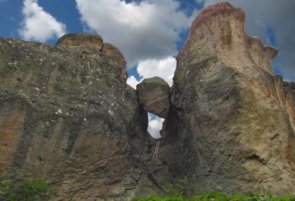 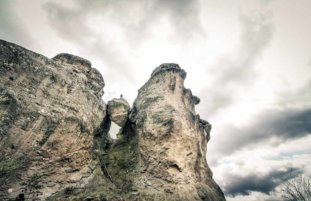 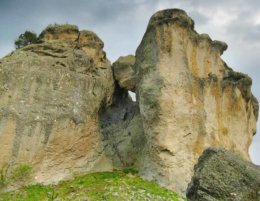 The folk legend related to Karadjov’s stone tells about Karadzha the voivode from Stanimaka’s (Asenovgrad – nowadays) village of Yavrovo. The rebel guarded the population of the surrounding villages from the raids of the Turks and the regular bashi-bazouk. Legend of the glorious haidouk has several variants, one is saying that the voivode was very angry at a band of bashi-bazouks who kidnapped the beautiful girl Dragana. They dragged her to the top and beat and raped her to death. Since then, the girl’s place of her death is called peak Draganitsa. Karadzha voivode waited for the time of vengeance to come, and in a few days, he heard that the same band of bashi-bazouks feasts in the nearby village of Mostovo. He called his band of voivodes, attacked and killed 25 Ottomans. He left only one alive and accompanied him to Plovdiv’s governor to tell him that the Bulgarians from Stanimashko (the area of nowadays’ Asenovgrad) will no longer suffer the atrocities of the bash-bozouks. However, this angered the ottoman governor and he sent a regular army. The Turks surrounded the rock, and after an uneasy fight, they slaughtered the voivodes, Karadzha voivode was also killed. Since then, the stone bears his name.

There is another popular legend that tells the voivode buried large treasure somewhere under the stone before he died. Local people avoid discussing the Karadjov stone, because they think the place has impure energy and the buried treasure of the murdered voivode is a bad omen, so the elderly people regularly advise the tourists if they accidentally encounter the treasure to throw the gold and to run away, so a curse for meant for another person won’t be cast on them.

Karadjov kamak is located near the village Mostovo. To get there, simply follow the road from Asenovgrad to Kardzhali, after Cherven turn right and follow the road to Gornoslav, then Oreshets and after 8 km you will be in Mostovo. The path to the landmark is marked and you can’t miss it.