Holy Cross Day and the Gathering at Krastova Gora

Holy Cross Day and the Gathering at Krastova Gora

Holy Cross Day is considered one of the major Christian celebrations. It is also known as The Feast of the Cross, or officially – The Exaltation of the Holy Cross. And while there are 4 such feasts throughout the year, the major one is held on 14th of September.

Before we learn more about the gathering in Krastova Gora and what makes it so special, let us first learn a little bit more about the history of the celebration itself.

How Did Holy Cross Day Start?

Historical data about the celebration can be found in Church tradition. According to it St. Helena undertakes a major search for the tomb of Christ in 326 AD. In her search she reaches the holy lands of Palestine and actually finds the Lord’s grave.

Aside from the tomb, however, there are some other interesting finds. The three crosses mentioned in the Holy Gospels are also found. According to Church tradition the cross of Christ was distinguished by touching it to a dead man, who was then risen. Later a little piece of Jesus’s cross had been sent to the roman emperor at the time (whose mother was St. Helena herself), while the cross had been laid at the Church of the Holy Sepulchre in Jerusalem.

The said church was consecrated on the 14th of September, 335, which is why this is the date of the celebration. On Holy Cross Day thousands of people gather in front of the church and the bishop raises the Cross of Christ, so that all can see it. This raise is called “exaltation”, hence the official name of the event. 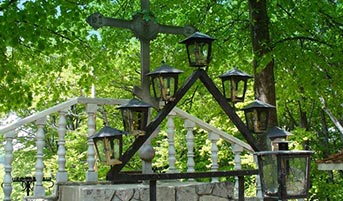 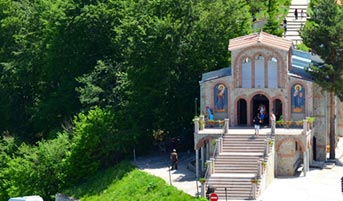 The Gathering at Krastova Gora

In Bulgaria, Holy Cross Day is celebrated all over the country with different traditions, beliefs and customs, but the most pronounced and interesting way of celebrating it remains the gathering at Krastova Gora.

On the eve of September 13th a lot of people from all over the country come, so that they can worship at the holy place. The interesting bit is that the monastery itself offers accommodation, so people can actually immerse themselves even more in the magical feeling of holiness at this day. However, the monastery is not a hotel or guest house, so it has its limitations. A lot of people prefer a more suitable place, such as our “Kalina” guest house.

The people, who visit the holy place, usually stay for a nightly vigil in front of the “Intercession of the Theotokos” church. There they pray for health and offer their gratitude. Workers at farm fields all over Bulgaria come to thank for the yield and harvest, while also praying for blessings and appropriate harvesting weather.

The interesting part is that some people prefer to go for a solitary prayer at one of the nearby chapels. Some stay throughout the night in worship and prayer, leaving only when the dawn breaks.

More about the place can be read at our own page “Krastova Gora”.