The Bachkovo Monastery Dormition of the Holy Mother of God (archaically the Petritsoni Monastery or Monastery of the Mother of God Petritzonitissa) in Bulgaria is an important monument of Christian architecture and one of the largest and oldest Eastern Orthodox monasteries in Europe. It is located on the right bank of the Chepelare River, 189 km from Sofia and 10 km south of Asenovgrad. The monastery is known and appreciated for its unique combination of Byzantine, Georgian and Bulgarian culture, united by the common faith. Christians all over the world visit the monastery, especially on August 15 when is the Dormition of the Mother of God.

The monastery was founded in 1083 by the prominent byzantine military commander and statesman Gregory Pakourianos, as a Georgian-dominated Orthodox monastery. He set up a seminary for the youth at the monastery. The curriculum included religion, mathematics, history and music. In the 13th century, the Georgian and Chalcedonic Armenian monks of the Petritsioni (Bachkovo) Monastery lost their domination over the monastery, but their traditions were preserved until the beginning of 14th century.

During the time of the Second Bulgarian Empire, Bachkovo Monastery was patronized by Tsar Ivan Alexander, evidence of which is an image of him on the arches of the ossuary’s narthex. It is believed that the founder of Tarnovo Literary School and last patriarch of the medieval Bulgarian Orthodox Church, Patriarch Euthymius (1325-1404), was exiled by the Turks and worked in the school of the monastery.

Although the monastery survived the first waves of Turkish invaders in Bulgarian lands, it was later looted and almost entirely destroyed. However, in the 15th century, it was almost fully restored. The refectory, whose mural paintings by an anonymous painter bear a significant artistic value, was reconstructed in 1601 and the Church of Mary, still preserved today, was finished in 1604. 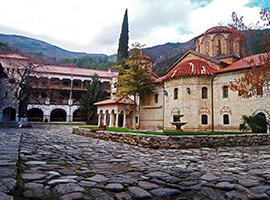 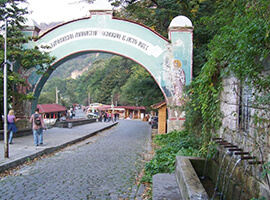 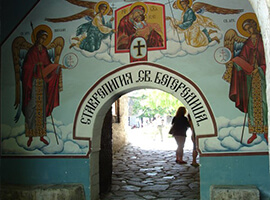 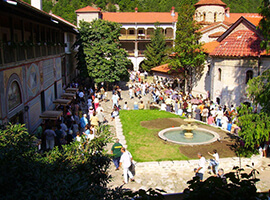 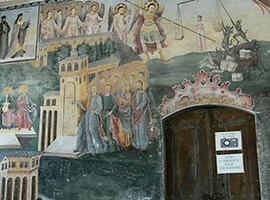 The monastery houses many other buildings, works of art, literature, etc. One of the oldest buildings in the monastery is the medieval Archangels’ Church, which dates back to the 12th century, its vaulted open narthex was painted in 1841 by the renowned Bulgarian painter Zahari Zograf. The inside of the church was painted by the artist Joan Mosch in 1846. Another interesting building in the monastery is its museum. There you will find a rich exhibition of church plate, icons, books, the sword of the Holy Roman Emperor Friedrich Barbarossa, a sultan’s firman from 1452, a wood-carved cross with miniatures and more. One of the most fascinating works of art of the Bulgarian National Revival is the fresco of the Doomsday, painted by Zahari Zograf in 1850, it is retained in the Saint Nicholas Church. The church also houses the much-cherished icon of Virgin Mary. The already mentioned relics are truly fascinating, however, the oldest and most interesting one is the Armenian Gospel from the 10th century.

Follow the road from Asenovgrad to Smolyan. After 10 km you will reach the village of Bachkovo. Once there, look for a signpost.

With the majority of shops, stalls and restaurants that enclose the pedestrian alley to the monastery, the monastery complex and its surrounding area have become a flourishing tourist attraction. Here is exhibited literally everything that grows and is produced in the Rhodope Mountains – rare herbs, homemade jams from wild fruits, goat and buffalo milk and cheese, rhodope blankets, etc.